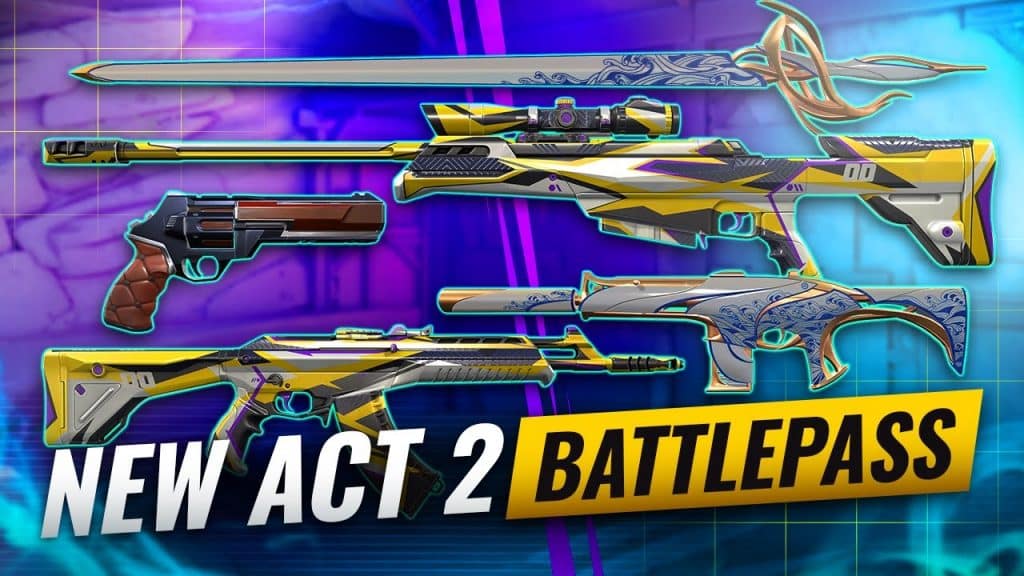 The hype is real for the newest Valorant Act 2 from Episode 3, and it’s all worth it based on the exciting new updates and features the valorant players will get by updating to the new Valorant Patch 3.05, which is now live globally!

If you haven’t yet gotten the Valorant update, quickly access your Valorant Game Client by double-clicking on the Valorant.EXE shortcut on your desktop and downloading the Valorant Patch 3.05.

Plenty of new changes are implemented in the New Valorant Act 2, which will contribute to making the Valorant gameplay more fantastic for its global valorant player base of tens of millions of gamers.

So, with the abundance of novel possibilities that you can now enjoy with your friends and global valorant players, let’s get an overview of everything new about Valorant!

Starting with the Valorant Battlepass, whose information was recently leaked, Valorant has included the Varnish, Nitro & Artisan Gun Skins for the 12 different guns in the battlepass. It is also said to be the first battlepass to offer so many weapon skins.

Here’s a rundown of every cosmetic item you get from the new Valorant Battlepass:

There are three different types of Valorant gun skins available with the battlepass. Players can unlock them from their respective tiers by obtaining the required XP points, which they can do by completing their daily and weekly missions.

Alternatively, you can also unlock all the items in the battlepass by using your Valorant Points (VP). It is the same currency you use to buy the battlepass and valorant gun bundles, so you’ll be exchanging approximately 15,000 VP to complete your battlepass progress until Chapter 10.

Note: The players might need to use their Radianite Points to separately purchase each different color for each of the guns belonging to the Artisan Skin Bundle.

Unlike what was speculated from the previous leaks, the new battlepass with Valorant patch 3.05 Act 2 does not feature a few of the Valorant Gun buddies. Still, valorant players can unlock the following gun buddies:

Similarly, a few valorant sprays aren’t included in the new battlepass, but players can still unlock the following Valorant sprays:

Valorant Players can now receive a 3% XP boost towards each matchmade game they play after purchasing the new Valorant Battlepass. It is noteworthy to learn that the boost will expire with the battlepass, and the 3% boost does not apply to the Valorant Daily and Weekly Missions that you may complete.

The Valorant Spectrum Bundle is the first audio-driven weapon skin line designed in collaboration with Zedd, the globally famous DJ & Music Producer. It is available for purchase for 10,700 VP.

The developers have approached the weapon designing aspect in a new way with the Spectrum Bundle. They created the audios of the bundle items first, followed by creating their models and graphics afterward.

It has resulted in a unique weapon design that hasn’t been previously done, and even the valorant players admire it apart from the loyal fans of Zedd.

The Valorant Zedd Collaboration provides avid fans of valorant with weapon skins and Spectrum valorant sprays, Spectrum Player Cards, Spectrum gun buddy, and Zedd Gun Buddy. These exclusive items are only available for purchase for a limited time, so valorant players can quickly grab the spectrum bundle from the Valorant store.

After completing each Act, the valorant developers release a patch that incorporates a new battlepass, certain bug fixes, and other improvements & additions to the game.

The latest Valorant Patch 3.05 comes with numerous Buffs & Nerfs to some Valorant Agents besides featuring the return of division in Immortal Rank and other changes. Read them below:

The eagerly awaited Valorant Map Fracture is now globally available to play in an exclusive queue-only mode from September 8th until September 21st. After that, it will join the other six valorant maps in the Valorant Unrated and Competitive Queue.

Its teaser only offered a glimpse into the map, and the leaked Fracture images didn’t make it easy to comprehend the entire map, except showcasing that it is, in actuality, shaped like the ‘H’ alphabet.

The Fracture Map is unique in many ways within Valorant and among the other tactical FPS games in the Market. It features two spike sites and two attacker spawn locations, with the defenders spawning in the middle of the map!

Such a creative feat has provided Valorant players with an incredibly competitive map that will test their best abilities throughout the match rounds. The map features multiple user interaction options, and overall, it is also one of the biggest maps in valorant after Breeze.

Moreover, the map features a unique aspect to it. The two attacker spawn sites are connected with ropes, and its existence makes up for quite interesting valorant gameplay. So, quickly learn all the Fracture Map everything you need to know details so you too can surprise your enemies and prevent the OTL Spray situation.

The complete host of features introduced in the Valorant Episode 3 Act 2 Reflection will help improve the pick ratio of some valorant agents besides allowing valorant players to engage in uniquely competitive gameplay on the new Fracture map. Moreover, the featured Battlepass Skins and the Spectrum Bundle will also help enthusiasts collect top-tier cosmetic items.

Lastly, with the VCT Masters Berlin tournament start date being 10th September 2021, be sure to check out the global pro eSports Valorant players compete to become the Global Valorant Champions.